Lucretia Grindle: A little bit of feminism with your mysteries

I've read two Lucretia Grindle novels The Lost Daughter and The Villa Triste and enjoyed both immensely. Both books are modern day crime mysteries, set in Italy with the roots of the mystery in the past. In the case of The Lost Daughter the story centres around events of the 1970s and especially the murder of the politician Aldo Moro and the Red Brigades. In modern day a young woman goes missing while studying in Italy. Her father and stepmother have just arrived to celebrate her birthday and prove to be the link back to a 1970s conspiracy. The Villa Triste begins in 1943 and the Italian partisans. In the modern day a partisan hero has been killed in highly specific circumstances possibly related to his time as or because he was a partisan. Both have been well developed mysteries with decent female characters.

The two main investigating police officers in both books are in fact male but the stories and mysteries are most definitely female-centric. In fact the focus doesn't really stray from the female lead roles even when the story switches to the investigation that is taking place.

She is a woman who clearly likes other women and has an understanding of why, even not so likeable women behave the way they do. She doesn't follow the stereotypes, which is refreshing. The female characters all have faults and positives. There is no dwelling on how the female characters look, in fact their appearances are only mentioned to set an initial impression and if relevant. They are also all doing something. They aren't just companions to men or facilitating men doing things. They are the stars of their own story.

Grindle shows a real awareness of abusive relationships in The Lost Daughter. She seems to understand how and why abuse begins and why women get caught up in it. In fact the two main female characters, stepmother and daughter are groomed when they are young. However, in addition to that the police officers also recognise the dynamics at play. There are no excuses made or minimising of the abuse.

In The Villa Triste Grindle writes about two sister's experiences during WWII. Apart from being really interesting, punctuated with factual information and statistics, it is an account of the war through women's eyes. As most of history has been written seen through men's eyes I really enjoyed reading about the emotions and fears of the two women, even though it was a fictional account. But it was more than that. Grindle seems to have an awareness that women's history has been largely eradicated and makes an effort to highlight that and fill in some gaps. For example, did you know that out of approximately 200,000 partisans, 55,000 were women and 35,000 of them fought in armed engagements. So much for women not fighting on the frontline. So much for women not being as capable or too weak or too high a risk. This is emphasised perfectly in this quote and also sums up quite nicely why I have enjoyed her books:


'That even in that day and age,' he said, 'in any day and age, that people always insist on believing their heroes are men.'

Posted with Blogsy
Posted by scallopsrgreat at 00:47 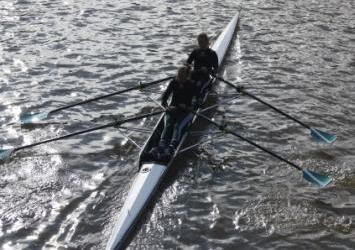 scallopsrgreat
I am a feminist with two small sons and a keen interest in sport. I have been a competitive rower and coach for over 25 years. This blog is intended to be a feminist perspective of aspects of my life and interests, especially sport, my children and topical political issues.